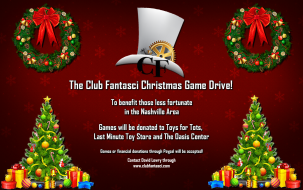 The idea behind the drive came to David after thinking about how he could help a family this year for Christmas on a bigger level than in past years. Having just come back from the Board Game Geek convention in Dallas, TX, David researched possible charities and immediately launched the drive. Jumping on board immediately were IELLO Games, R&R Games, Schilmil Games, Quiver Time, and personal donations immediately rolled in. The drive has already raised over 130 games and $260.00. The drive will run through December 12th when all the donations are due to Toy’s for Tot’s.

David Lowry is currently the Director of Marketing for Academy Games and started in the board game industry working with LnL Publishing and Common Man Games. David has developed marketing strategies and video production for several companies in the industry such as Arcane Wonders, Greenbrier Games, Smirk & Dagger Games, Fireside Games, WIBAI Games, Overworld Games and Momentum Volsk.

“I am humbled to be able to help those less fortunate this Christmas Season in any way I can. It is the very least I can do and I only hope it makes someone’s Christmas a bit brighter.” says Lowry.

David Lowry is a former touring musician and has been in the music business for over 20 years, doing management, PR, marketing and promotions with former Billboard Top 10 artists such as Brother Cane, Damon Johnson and the Juno award–winning Sass Jordan. David has also done PR and marketing in the board game industry with various publishers for over 3 years now. Playing board games since he was a child, David understands both sides of the medium inside and out.

There are no dates yet.